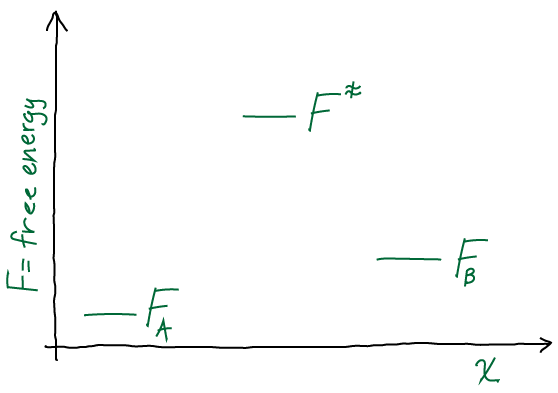 From continuous to discrete time (Exercise 7)

Give yourself a pat on the back if you’ve come this far. You have used simple exact solutions to differential equations to grasp the essentials of non-equilibrium processes. But there’s the physical process on the one hand, and the mathematical description on the other. We’ve used continuous-time math thus far. We now move to discrete time and get a taste for “Markov state models,” which implicitly employ time discretization in the field of biomolecular simulation.

Let’s first review the questions from last time, based on the following pictures. 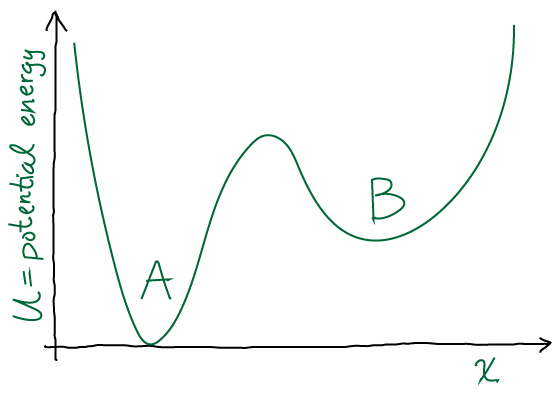 It’s finally time to connect our knowledge of continuous-time systems to discrete-time dynamical descriptions of discrete states, known as “Markov state models.” That is, how do Markov state models arise from continuous descriptions? We have just made (above) a crude connection between continuous potentials and discrete states, and this will suffice for now. So we will implicitly assume our discrete states are single deep energy basins that indeed behave in a Markovian fashion – i.e., the probability of transitions out of the state do not depend on the path taken to get to the state. Note that this is very special property and one you should not generally expect to be satisfied in a tractable way for an atomically accurate description of a complex system – though this is a topic for another day.

The following questions build directly on notes you have already been studying. We will adopt the somewhat annoying notation that

transition probability. There’s a technical reason for this if you want to deal with the matrices, but at least I want to be consistent with my prior notes.