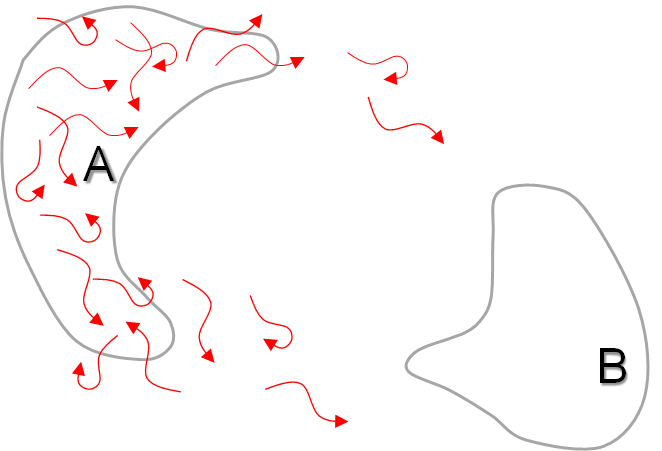 A demonstration of the Hill relation itself was previously given. Here, we want to consider the discretized version of interest for Markov and related models. I emphasize at the outset that the discretized Hill relation is not exact for Markov state models constructed in the usual way from an equilibrium ensemble of trajectories (or an approximation thereto). The relation is only exact for a special type of “history-augmented” Markov model constructed from trajectories harvested from the A-to-B steady state.

So let’s start our mental exercise by setting up and stating the discretized Hill relation. We’ll consider a discrete set of regions (bins, cells, “microstates”) indexed by

which tile all of phase space. That is, every phase point (configuration and set of velocities if you wish) is in some cell but no phase point is in more than one cell. We’ll also assume that the initial and target states, A and B, consist exactly of non-overlapping sets of these phase-space cells. If

is the probability (fractional occupancy) of cell

is the conditional probability to transition from

This looks messy at first but it’s just a way of counting all the probability flow into state B in the A-to-B steady state, where the flow from

We’ll derive the discrete relation by working backward from the steady state itself. Note that we’re not proving the (continuous) Hill relation itself – that’s already done. We’re assuming the continuous form is true, and we will assume we have complete knowledge of the steady state. You can imagine we have a trillion copies of our system running independently and that together these systems constitute a steady state in which systems reaching B are re-initiated at A (according to our chosen distribution within A).

So we’ve got a lot of information in our hands. We just want to make sure it fits together the right way. And, like I said, I hope you’ll agree all this is obvious … in the end.

from the trillion copies of our system. We examine all our systems, and of those that are in cell

at a given time

, we count the fraction that are found in cell

. We average this fraction over all the systems and over all

, which therefore depends on the chosen “lag” time

will depend on the intra-cell distribution. For example, in the

steady state, perhaps more trajectories are closer to one edge of the cell than another. 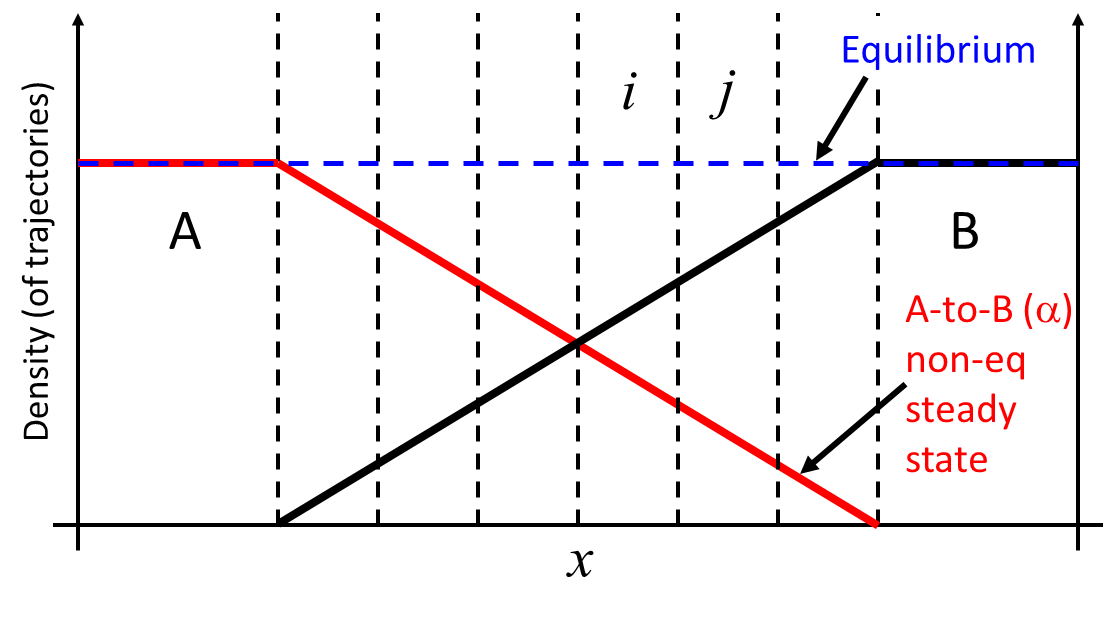 As the simplest possible instance, consider the case of simple diffusion in one dimension, as sketched above. In the

steady-state, the density of trajectories decreases linearly as B is approached. Therefore the probability to transition from any cell

is lower to the subsequent cell

closer to B than to the preceding cell! Importantly, this distribution is different from the equilibrium distribution, which would be used in a standard Markov state model, and which is simply constant in

Moving on. Now that we have the

, we must obtain the

values. We can do this in two ways. Most simply, we can simply calculate the fractional occupancies from our ensemble of systems in the

steady state. Alternatively, we could use the set of

values within a linear algebra (matrix) formulation to calculate the

, so long as we appropriately set up the source and sink boundary conditions. In any case, we can certainly obtain the steady-state probabilities.

Now let’s recall our actual goal – to calculate the probability flow per second into target state B, which is equivalent to the rate (inverse MFPT) according to the continuous Hill relation. Our reference value, which is correct by definition, is just the fraction of all trajectories which newly arrive to B when we examine the ensemble every

is part of B and

gives the conditional probability to arrive in B after a

interval, but we’re interested in the actual probability which will arrive. Well, we know that

at all times in steady state. Thus, the actual probability arriving from cell

gives the fraction of the cell

probability which will make the transition.

Now the discrete Hill relation is simply a sum of the

which transition to cells within B. We don’t have to consider any cells which only lead to indirect transitions to B, perhaps over multiple

To summarize, the discrete Hill relation is correct whenever

values are correct, and those in turn will be unbiased when calculated based on the steady-state distribution of trajectories within every cell

. That is, the fundamental transition probabilities must be estimated from a specific initial distribution within each cell that corresponds to the steady-state of interest. The equilibrium distribution is wrong in this case, and that shouldn’t be surprising given that we’re calculating a non-equilibrium quantity.

That’s it! I hope in the end all this seems obvious … but hopefully it wasn’t a total waste of your time!!