Q: What is a trajectory?

A trajectory is the time-ordered sequence of system configurations which occur as all the coordinates evolve in time following some rules – hopefully rules embodying reasonable physical dynamics, such as Newton’s laws or constant-temperature molecular dynamics.

Q: What is a trajectory ensemble?

It’s a set of independent trajectories that together characterize a particular condition such as equilibrium or a non-equilibrium steady state.  That is, the trajectories do not interact in any way, but statistically they describe some condition because of how they have been initiated – and when they are observed relative to their initialization … see below.

Q: What are the types of trajectory ensemble?

There are three types of trajectory ensembles.  Assume each to consist of a very large number of trajectories.  In the figures, individual trajectories are shown in blue and average behavior is shown schematically with solid lines. 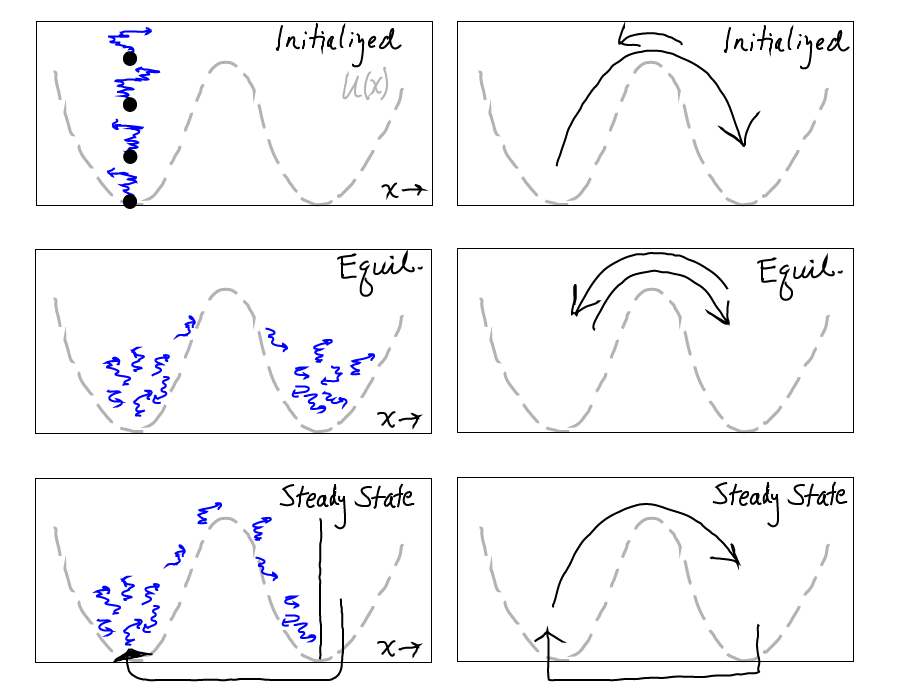 Q: What is an “equilibrium trajectory”?

Because equilibrium is an ensemble property that characterizes a set of configurations or trajectories, it is somewhat oxymoronic to describe a single trajectory as equilibrium (or non-equilibrium) in nature.  However, informally, the phrase “equilibrium trajectory” is used when a trajectory is not subject to any artificial biasing forces; sometimes there is the implicit notion that the trajectory is visiting high-probability parts of configuration space.  Of course, it is difficult to know whether a trajectory is typical or whether it has visited the important parts of configuration space without examining many trajectories or a very long trajectory.  If a trajectory were extremely long – in the sense of exhibiting multiple transitions among all important states of a system – then it would be more reasonable to describe it as a representation of equilibrium.  Unfortunately, for many of the most interesting biomolecular systems, this is currently impractical and is likely to remain so for years to come.  One notable exception would appear to be the folding/unfolding trajectories generated by the DE Shaw group for small proteins – but note these were generated at elevated temperatures to enable transitions.  On a related point, how would one know whether equilibrium-like sampling has been obtained in any given simulation?  This question has been addressed by my group and others’ using the notion of “effective sample size” – see references below.

Q: What’s the value of a trajectory ensemble compared to a string-like optimal path?

Methods for finding optimal paths and statistical average “strings” have become increasingly popular, and they can be very valuable in principle for describing a dominant mechanism.  It is useful to be aware of the pros and cons of such approaches as compared to the trajectory ensemble picture.  At least in principle, the trajectory ensemble has several advantages: (i) Steady-state trajectory ensembles directly provide unbiased estimation of the rate via the Hill relation , whereas optimal-path approaches have to make inferences based on possibly strong assumptions regarding the connection between high-dimensional landscape and kinetics.  I hope to comment on those assumptions in a future post.  (ii) Although a single path or string provides a reassuringly concrete picture, a true description of mechanism must account for all the heterogeneity that may be present, such as alternative pathways and/or path fluctuations.  The path ensemble automatically includes all the latter.  (iii) Most single-path methods are subject to the well-known “trapping” phenomenon in which the calculation fails to visit a channel which is most important to the process at hand.  Ensemble methods may also suffer from trapping, but some variants may be more robust.  I hope to expand on this point in a future post.