The “Hill relation” is a key result for anyone interested in calculating rates from trajectories of any kind, whether molecular simulations or otherwise.  I am not aware of any really clear explanation, including Hill’s original presentation.  Hopefully this go-around will make sense.

The Hill relation applies to any “first passage” process – which could be diffusion from one region to another, chemical isomerization, protein folding, a cell-signaling process, or ….  Quite simply, a first-passage process is one in which a system is initialized somehow (it doesn’t matter how but the initialization should be well-specified or at least reproducible) and a hypothetical observer waits until a target state is reached or occurs (any target state will do).  The observer could measure the time required for each occurrence, and the average time for such a process is called mean first passage time (MFPT).  The inverse MFPT is one common definition for a rate constant, because the MFPT clearly describes the timescale for the process.

The Hill relation tells us that in a steady state (SS) implementation of a first-passage process – where trajectories are initiated from some arbitrary state A and terminated upon reaching another, separate state B (at which time they are re-initiated at A) – that the inverse of the mean first-passage time (1/MFPT) is given exactly by the probability flux into B, i.e., the fraction of trajectories entering state B per second.

We assume that trajectories are initiated according to some desired distribution from state A.  (Different distributions of initial phase-space points will lead to different MFPTs, not surprisingly.  We’re just going to assume you’re happy with some initial distribution, though it’s worth noting that the choice of initial distribution requires a more subtle discussion: see the paper by Bhatt and Zuckerman.) 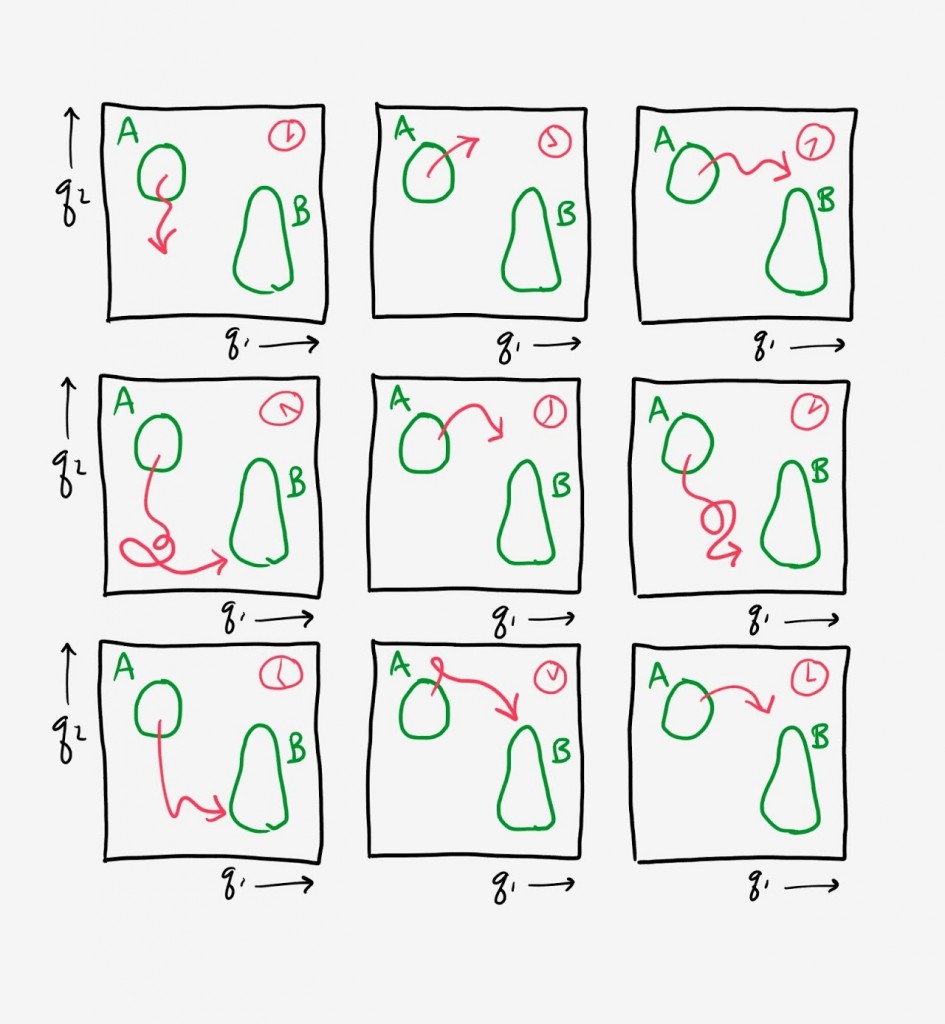 To derive the relation, we will imagine running a very large number of fully independent simulations for a very long time.  The schematic shows a set of red trajectories projected onto two coordinates.  Importantly, we record the full history of each trajectory – the coordinates at all times – and we see a large number of A-to-B transitions. 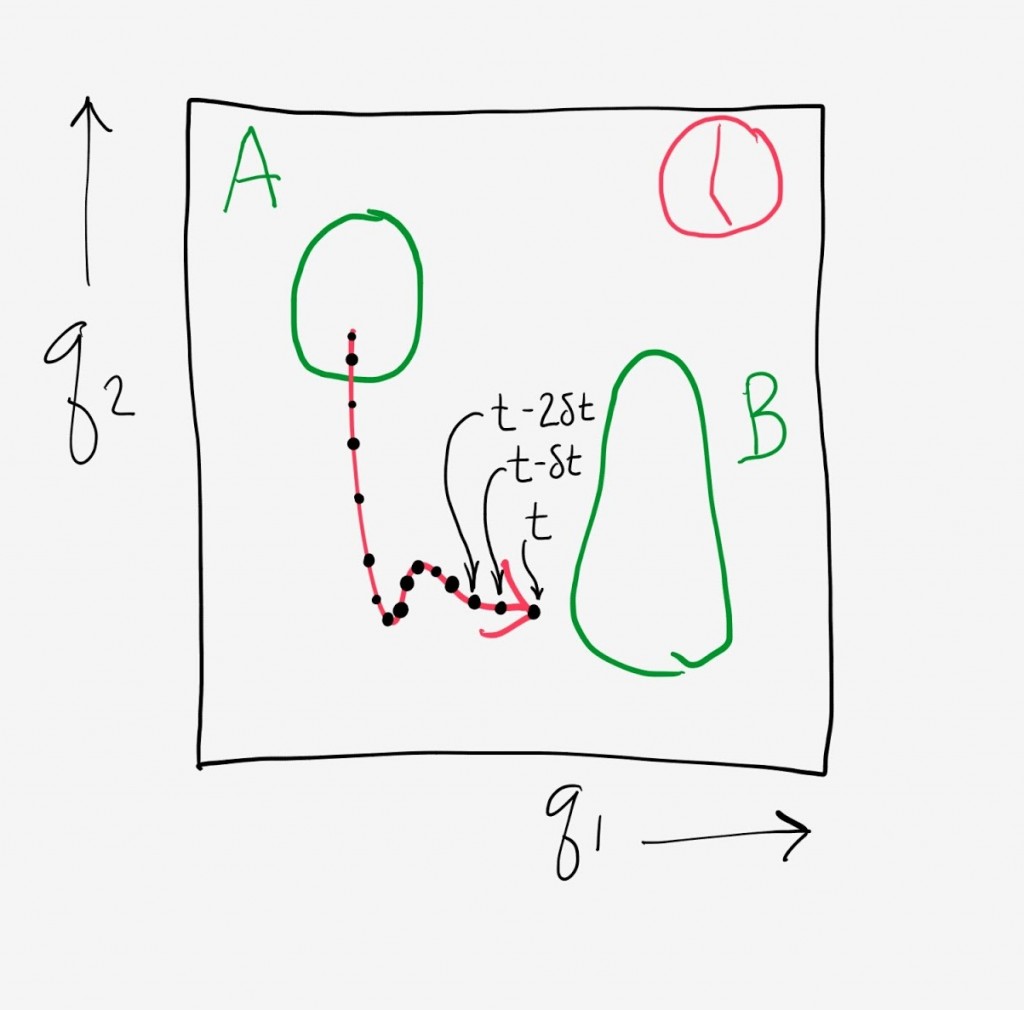 Because we have all information about the trajectories in the steady state, we can go back and examine precisely where each was at all times in the past.  This enables us to perform the simple transformation of “stretching” out each trajectory in such a way that we examine it in terms of its temporal progress toward state B.  This is like waiting at a bus stop with your smart phone and seeing the future arrival times of all the buses, regardless of the bus route.

Hence we develop a picture like that shown below, with each red trajectory marching toward its arrival in state B.  We know how long each trajectory will take to arrive because we (imagine we) have simulated each long into the past and future. 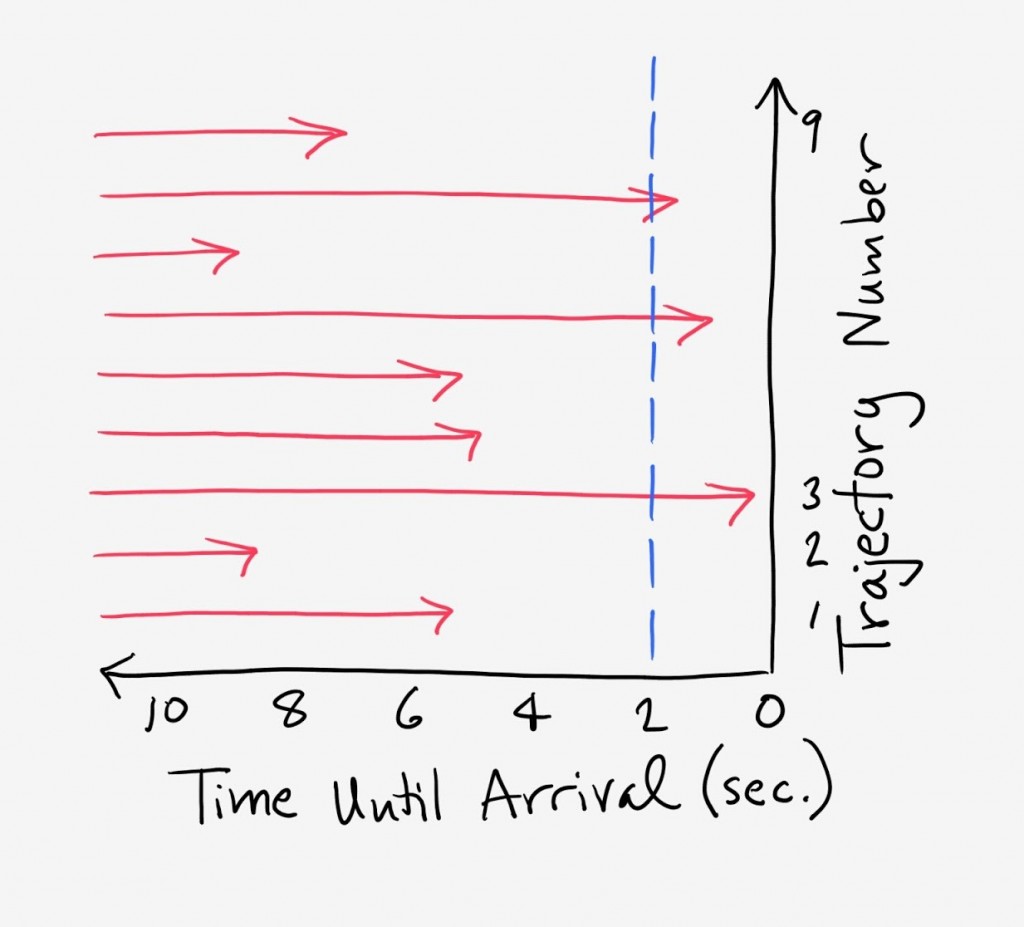 Thus we have it: Probability Flux = 1/MFPT.  Importantly, this is an exact result, not dependent on the type of dynamics or any assumptions about the states or the initial distribution (of starting points).

The reason I consider the Hill relation a “remarkable result,” even if it gets to seem obvious when you think about it for too long, is that provides a means in principle for calculating a very long timescale (the MFPT) from an arbitrarily short observation period (of a steady-state ensemble of trajectories).  Although generating a steady-state ensemble in a naive way would require times of the same order as the MFPT itself, there are specialized methods that permit the indirect inference of steady-state information from short simulations.  These are path-sampling methods including the weighted ensemble approach, milestoning, transition interface sampling, forward flux sampling, non-equilibrium umbrella sampling and others.