I was worried that a discussion of hair gel would have a certain bias toward men, but my wife assures me that women are just as likely to use a leave-in hair product.  I’m going to rely on that unstatistical assurance and roll right on. 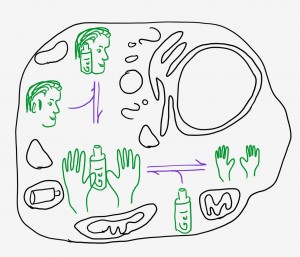 We want to consider two tasks: putting hair gel in and taking it out.  The first case is easier, so let’s tackle that right away.  You get some gel, smear it around on your hands, and then give yourself a head massage with those gelly hands.  (Better smear it around your hands first, for quicker homogenous application.)  So that’s it, the gel gets on your hair, and all would be ‘cut-and-dry’ so to speak, except that your hands still have a bunch of gel on them.  In fact, you can rub your hands on your hair for quite a while and you still won’t get all the gel off … and that is genuinely interesting in a statistical physics context.  In essence, you have established an equilibrium between the gel in your hair and the gel on your hands.  OK, now wash your hands, and keep reading.

Let’s imagine you arrive at work and decide you look a little too much like John Travolta astride Greased Lightnin’ and not enough like a scientist.  Time to get rid of some of that gel. We can think of a few ways to get the hair gel out of your hair.  One is to take a shower.  Another would be to stick your head in the sink under running water (but don’t bump your head).

But you can get out that excess gel and avoid bumps and splashing by thinking statistically.  Recall our observation about putting in hair gel: some of it stays on your hands, in an effective equilibrium with the gel in your hair.  So you can use the principle underlying that observation to remove gel.  Put your clean (maybe wet) hands in your hair and rub them around to establish an equilibrium.  Some of the gel is on your hands.  Wash it off and repeat til you transform yourself back to a respectable nerd.

For those of you in the business, the analogy to protein-ligand binding is obvious.  Your hair is like a set of proteins and the gel represents ligands (ions, small molecules or other proteins).  Maybe your hands are the proteins’ environment.  Allow ligands to interact with proteins and they will reach a binding equilibrium.  But we can stretch the analogy a step further to invoke signaling in the cell.  Say a burst of calcium ions is released in the cell in response to a biological signal and the ions bind to calcium-receptor proteins.  We can imagine the signal can be reversed (the hair gel removed) if the unbound calcium concentration is reduced (you rub clean hands in your hair): the equilibrium between proteins and ions will re-adjust due to constant binding/unbinding events.  Eventually, almost all the proteins will lose their calcium ions as the signal is removed – from John Travolta to nerd.

Lesson: Look for statistical physics in the world around you – it’s better than texting while walking.